On the last day of the NYS legislative session, the Justice for Job Seekers bill S.8102/A.10672 passed the Senate 44-17 and the Assembly 109-15. Once signed by Governor Andrew Cuomo, the bill will provide fair and meaningful protections to low-wage immigrant workers as they look for work in the state of New York. This is a huge win for our communities! 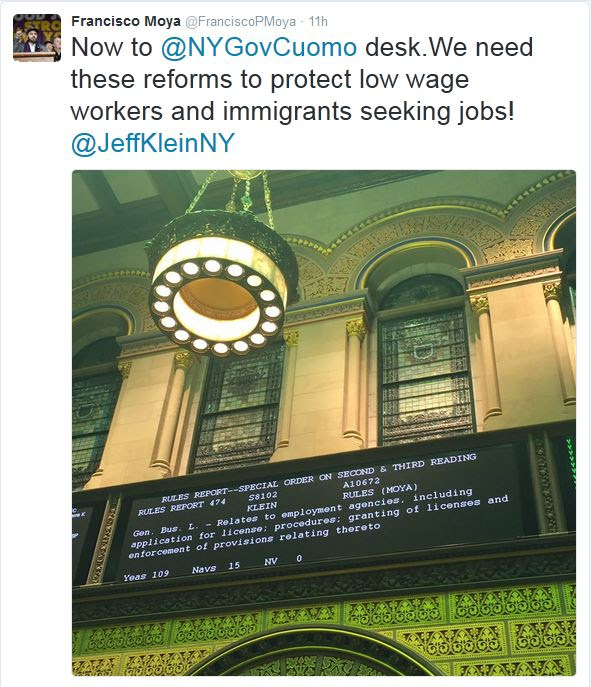 Justice for Job Seekers has become a reality because of you! We thank Senator Jeffrey Klein and Assemblymember Francisco Moya for being our champions and for their relentless commitment to our communities and to this bill. This was a grassroots community effort  and we are very thankful for all of our community members that led this fight, to all of our coalition partners and to our allies for their support throughout this campaign (see full list below).

This transformative campaign was born from the experiences of NICE members who suffered at the hands of predatory and fraudulent employment agencies. Agencies that charged hundreds of dollars for job placements that never come through. After forming a worker committee to address this problem, NICE members began to educate immigrant workers on their rights as consumers and meet with decision-makers and other community groups to come up with a legislative solution. This led to the creation of the Justice for Job Seekers campaign. 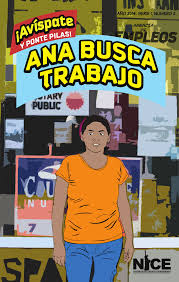 The Justice for Job Seekers bill A.10672/S.8102 will curb prevalent consumer fraud in the employment agency industry among low-wage workers by eliminating the advance fee exception and by strengthening enforcement. The new law will protect vulnerable job seekers throughout the entire state of New York. Over 400 licensed employment agencies exist in the state, with the majority of them operating in the five boroughs, Long Island, and Westchester County. However, many more unlicensed agencies operate through the state in violation of state laws. The bill will specifically:

1) Deter employment agency abuse by amending the General Business law to eliminate the advance fee exception and no longer allow employment agencies to charge low-wage workers (Class A; A1) a fee before placing them in a job. Class A and A1 workers are the only class of workers subject to advance fees under current law. The bill’s reforms would provide low-wage workers the same protections afforded to all other workers, who may only be charged a fee after an agency has secured them a job.

2) Strengthen enforcement by targeting repeat offenders and increasing penalties against violation employment agencies. These changes will bring New York up to part with other states like New Jersey, Illinois, Nevada, and Hawaii so as to provide a greater and more effective deterrent against employment agency abuse. Furthermore, it would direct the New York State Department of Labor and the New York City Department of Consumer Affairs to publish forms in multiple languages and would allow the Office of New Americans to accept, process and refer complaints. This bill would also grant enforcement authority to the Attorney General.

3) Creates new avenues for relief for victims of fraud living outside of New York City by granting the Office of New Americans (ONA) authority to process complaints and refer cases to the appropriate state agencies. A trusted office among immigrants with strong community presence in various areas of the state, ONA will improve access to state enforcement agencies for a marginalized population that typically faces many barriers to coming forward and exercising their rights.

The existing laws make it exceedingly difficult for low-wage job seekers to hold employment agencies accountable. All too often, unscrupulous employment agencies, both licensed and unlicensed, exploit job seekers by flouting the law or tailoring their practices to take advantage of loopholes in the current law. What makes this more appalling is that they prey on a particularly vulnerable population: women and men seeking work, so they can provide for themselves and their families. The Justice for Job Seekers bill will make it harder for unscrupulous employment agencies to continue functioning with impunity and will ensure that all job seekers in New York State are protected.

###
New Immigrant Community Empowerment (NICE) is a community-based organization dedicated to building the power and advancing the rights of immigrant workers in New York.
Share